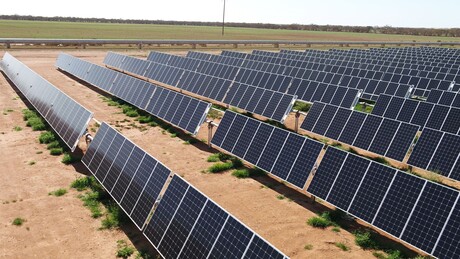 In pursuit of a zero-cost power future, greater than 7300 photo voltaic panels at the moment are powering one among SA Water’s major consuming water pipelines between the River Murray and Barossa Valley.

The massive photo voltaic array is put in on the second pump station on the Swan Reach to Stockwell Pipeline, and can scale back SA Water’s working prices within the supply of fresh, secure consuming water from the Swan Reach Water Filtration Plant to hundreds of consumers within the Barossa area.

“The Swan Reach to Stockwell Pipeline spans across more than 50 kilometres inland from the mighty Murray across to the northern Barossa area, and therefore requires significant energy to pump clean, safe drinking water across such large distances,” Murphy stated.

“With all the positioning’s panels related and able to seize the Swan Reach sunshine, we might help offset our power wants utilizing photo voltaic power, with out altering the necessary operations of the water filtration plant.

“We wish to set an instance of proactive environmental management, centered on sustainability and motion on local weather change, and this photo voltaic array is a terrific instance of how we are able to make an actual distinction in slashing carbon emissions to the tune of round 2240 tonnes yearly.

“This is one of two solar sites set to be up and running in the Swan Reach region, with a further 16,000 panels currently being connected and soon to be energised at the pipeline’s first pump station,” Murphy added.

“Together with our other 30-plus solar sites strategically placed at our treatment plants, pump stations and depots across South Australia, we’re sustainably reducing our operating expenses and ensuring we keep prices low and stable for our customers.”

SA Water’s zero price power future initiative has seen greater than 360,000 photo voltaic panels positioned at websites just like the Bolivar Wastewater Treatment Plant, Adelaide Desalination Plant and major pump stations alongside the Morgan to Whyalla Pipeline, with all websites to be energised and related to the nationwide electrical energy grid over the approaching months.

“This initiative was designed by our people, and shows South Australians leading the way with the smarts and skills to integrate renewable energy and storage across our existing plants, pump stations and other land holdings,” Murphy concluded.